Ireland captain Reuben Crothers lauded his side’s ferocious start as five tries in 22 minutes helped round off their Under-20 Six Nations Summer Series with a 41-24 win over Scotland.

Scotland head coach Kenny Murray revealed a local car accident delayed their arrival to Benetton’s Stadio Comunale di Monigo and it appeared they were still on the bus as Ireland romped to a 24-0 headstart in just 16 minutes.

The floodgates opened for the Men in Green in the first minute as Daniel Hawkshaw touched down with Scott Wilson, Aitzol King, Sam Prendergast and Fionn Gibbons also crossing before the break with Scotland hooker Patrick Harrison’s double keeping them in touch.

But scores for Diarmuid Mangan and sub Shay McCarthy put the result beyond doubt for the Six Nations Grand Slam champions despite No.8 Ollie Leatherbarrow barging over for Scotland.

Flanker Crothers said: “During this tournament we have been a bit slow to come out of the starting blocks, so there has been a big focus to start fast and try and take the game away from Scotland and I’m glad we did that.

“It’s weird that it’s over. It has been a long season for us but we’ve had a successful one. We won a Grand Slam and have beaten England twice in one year.

“I couldn’t be prouder of the lads and what they have produced all year and to top it off with a win – that’s what makes it special.

“It has been a great honour to lead the lads and they should all be very proud of themselves.” 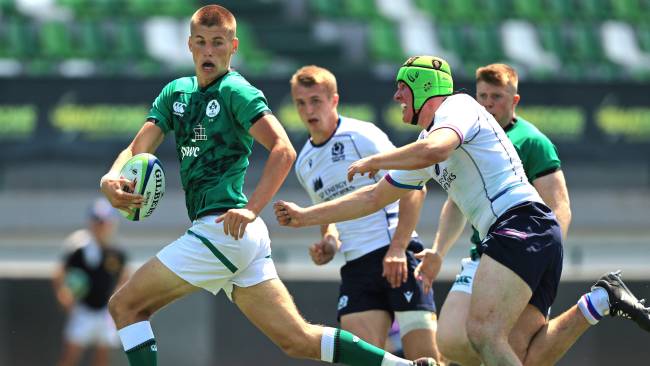 Try-scorer and fly-half Prendergast, 19, was at the heart of everything good for Ireland and after starting the last three games of the Summer Series, is desperate to kick-on and help his side to another Grand Slam next year after watching on enviously this time around.

“It was hugely important to finish the Summer Series on a high note,” said the Leinster man, who kicked a late penalty to record Ireland’s second win of the year over England in Round 3 but defeats to France and South Africa still saw them finish fourth in Pool A.

“Especially for lads like myself that weren’t in that Six Nations squad, we just wanted to make sure we were doing the jersey proud and not just coming in and losing.

“We wanted to get those last two wins, England and this, so it was great to finish with a win.

“I’m so hungry, watching lads in February and March win that – you were happy for them but you were jealous you weren’t involved. Hopefully I’ll get in the squad for next year and hopefully it can be a repeat.”