Leinster back row Caelan Doris’ sharp trajectory to becoming an international powerhouse was moulded by his experiences with Ireland Under-20s.

Doris started in Ireland’s historic 12-23 win over the All Blacks last weekend – their first ever on New Zealand soil – and a tremendous try-saving tap-tackle on Jordie Barrett typified his importance to his country.

The 24-year-old has been a mainstay in the Irish pack since his debut for the senior set-up in 2020, but the Mayo-born forward was turning heads long before his bow against Scotland in the Six Nations.

His journey started at Blackrock College in Dublin where he won the Leinster Schools Rugby Senior Cup in 2014, before captaining the 2016 side.

His promising performances saw him immediately picked up by Leinster’s sub-academy and it was when he graduated to their full academy that Ireland started taking notice.

Even though he was a year junior than most of his teammates, the imposing number eight made a strong impression in 2017 at the Six Nations Under-20s.

The captain’s role that he held at Blackrock College was once again granted to him in France for the 2018 World Rugby Under-20 Championship, even after an injury ravaged Six Nations campaign.

It proved to be a breakout year for the young star, making his Leinster debut against Cardiff Blues in the Pro14.

Assistant coach John Fogarty was impressed at the time with the way Doris seamlessly slotted into senior rugby.

Fogarty said in 2018: “He’s got a good mindset and fits in really well. Sometimes guys coming in can be looking around a bit, but he’s fitted in.

“It was a step up for him, he found the intensity a step up and the pressure that was on us at different times.

“That’s always a step up for lads when they come in but he adapted really well and that’s something’s he’s done throughout pre-season.” 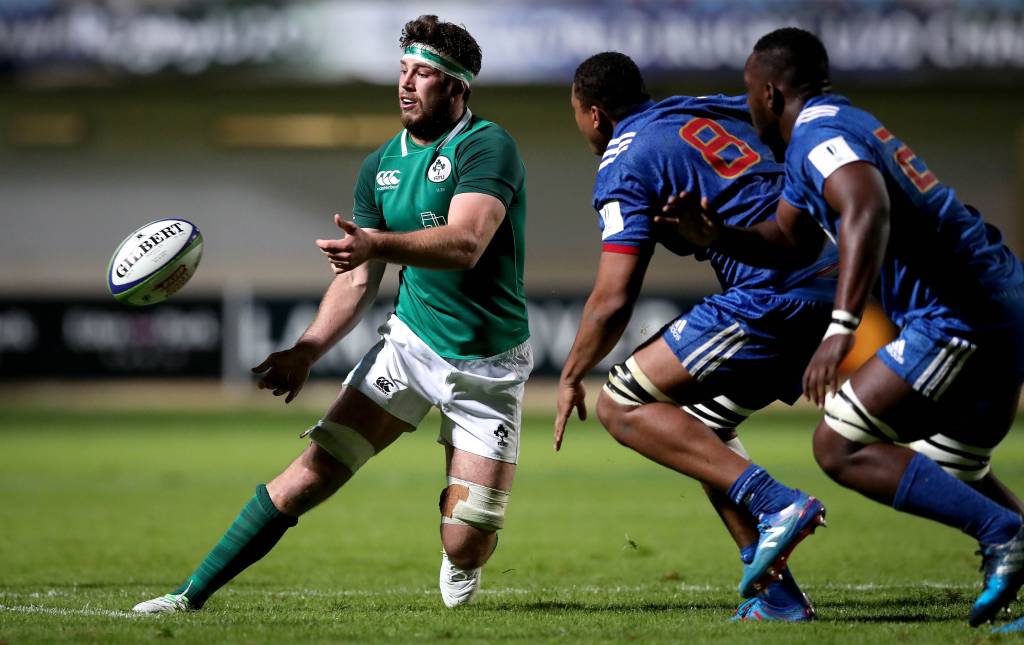 McFadden said: “Sometimes guys come out of school and have done well at that level, then come up to the professional level with Leinster and it can take them a while to get used to the physicality.

“But I remember that day [against Bath in 2017] some of the hits he was putting in and the carries, it was like he’d been there for a couple of seasons.”

The hype around Doris was deafening, but the rising star kept his head down, focusing on his rugby as the clamour for a first senior international cap grew to a fever pitch.

Before he made his European debut for Leinster, and after captaining the Under-20s in a largely disappointing World Championships, the then 20-year-old was already showing great maturity.

He said in 2019: “My focus is on playing here as much as I can, being in the matchday 23s as frequently as possible, and for the bigger games as well, hopefully.

“My focus is on performing well, getting opportunities here and hopefully they’ll come in the bigger games down the line.”

“It’s a big step up – bigger guys, less space, more organised defences. I always look to run into the space, not the man, but there is less of that.

“Obviously, the players are better defenders, they make better decisions, so often you’re running into two defenders as well, so that was probably a bit of a challenge at first, but I’m getting a little more used to it as the season progresses.

“Compared to the 20s, where you’ve one guy hanging off instead of being hit by two, that’s probably the main difference I’ve noticed.”

Doris has continued to take the hits in his stride, and few would say they didn’t see his inevitable rise to prominence coming back when he was the leader of his Under-20s national side.

Share this article:
Previous Story Where to Watch Finals Day of the Under-20 Six Nations Summer Series
Next Story Wales’ Woodman eager to finish Summer Series full of firsts in style against South Africa