He may not be built like an archetypal centre, but that has not stopped Ethan James fast becoming one of rugby’s most talented future stars.

At just 5 ft10 and 12-and-a-half stone he is not perhaps as physically intimidating as the likes of current Springbok midfielders, Lukhanyo Am and Damian de Allende, but he sure knows how to beat a defender.

His pace and trickery have been a huge asset to South Africa in the Under-20 Six Nations Summer Series so far, and like his teammates, the Junior Bok vice-captain is only just getting started again after a year without international rugby.

In the second feature of our ‘my rugby heroes’ series, James shares his rugby story so far as well as revealing his plans for the future.

And why not read the first of our My Rugby Heroes features, with France winger Louis Bielle-Biarrey

When I was five years old my father used to go away for work all over South Africa and he would always bring a rugby ball back. I started playing and then started watching afterwards, I loved the All Blacks players and have supported the Boks ever since. 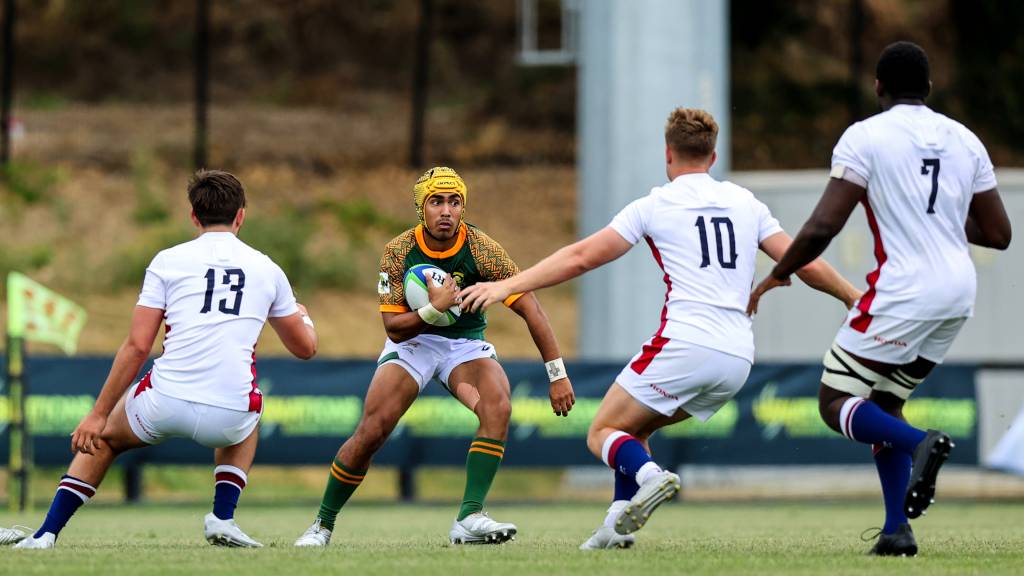 Who was your rugby hero?

At first, I looked up to guys like Daniel Carter, Ma’a Nonu and then Jean De Villiers and Jaque Fourie, they inspired me to pursue a career in rugby. They fuelled the passion and fire in me to pursue rugby as a career.

I think it was 2009 and they [De Villiers and Fourie] were the centre pairing for the Stormers and ever since I loved the outside centre position because I back my speed and skill set.

I liked the brand of rugby played back then. Obviously the game of rugby has evolved and has changed since then to a much more conservative game with a lot of kicking.

What does it mean to play for your country?

It’s a massive honour and a big privilege to get the opportunity, first of all.

Obviously I worked hard for it, but it’s a dream for every South African child to play for the Springboks one day and to get the opportunity to play for your national side in your junior years is just a huge honour.

It comes with a massive responsibility because there are so many heroes and World Cup winners who played in that jersey before you. It’s all about taking up that responsibility and leaving the jersey in a better place.

Have you always played as a centre?

I started off playing winger and then at the age of 11 I had this one coach who pulled me to outside centre and I have specialised there ever since.

I also played full-back for provincial sides in my younger years. I’m specialising in outside centre but I really enjoy playing full-back for the space and time you get with ball in hand, and as a winger you get more scoring opportunities, but I prefer playing outside centre.

How much would it mean to win the Summer Series?

From an individual perspective it’s a great opportunity to showcase your talent and to do your best and make use of every opportunity you get out there. It would mean so much to me as a player as it will look so good on the CV.

As a team, I think all of the guys in our age group did not have the opportunities in the last two years because of Covid. It would mean so much to us as a group because we came together in March, we worked so hard, put in the hours and came here and to play the Six Nations sides who have already had a Six Nations tournament behind them.

To win every one of those four games would mean so much to our group of players.

What does the future hold?

After the summer I’m joining Province to play in the Under-21 competition there.

It’s obviously always been a dream to play for the Springboks, so that’s my main goal, to one day put on the green and gold jersey for the senior side.

But in terms of short-term goals, I’m going to go back to Province, put the hard work in to win the under-21 competition, and then after that, stay with them because I’m really happy there at the moment and then try and make my breakthrough into the senior set up next year.

Share this article:
Previous Story What they said: The best quotes from Round 3
Next Story Teammates: Italy No.8 Ross Vintcent