Wales head coach Byron Hayward admits he was surprised by Georgia’s quality in Wales’ 30-24 win over the Junior Lelos.

Wales trailed 21-13 at the break, with all three of Georgia’s scores coming from lineout drives, the last of which started outside the Wales 22.

Hayward’s side did recover after the break thanks in no part to a score 35 seconds after the restart from captain Joe Hawkins.

But that was not the end of Georgia, and they very nearly stole the game at the death only, to be denied by a Dafydd Jenkins steal at a lineout on Wales’ five-metre line.

“It was tougher than I was expecting but in fairness you have to give a lot of credit to Georgia,” said Hayward. 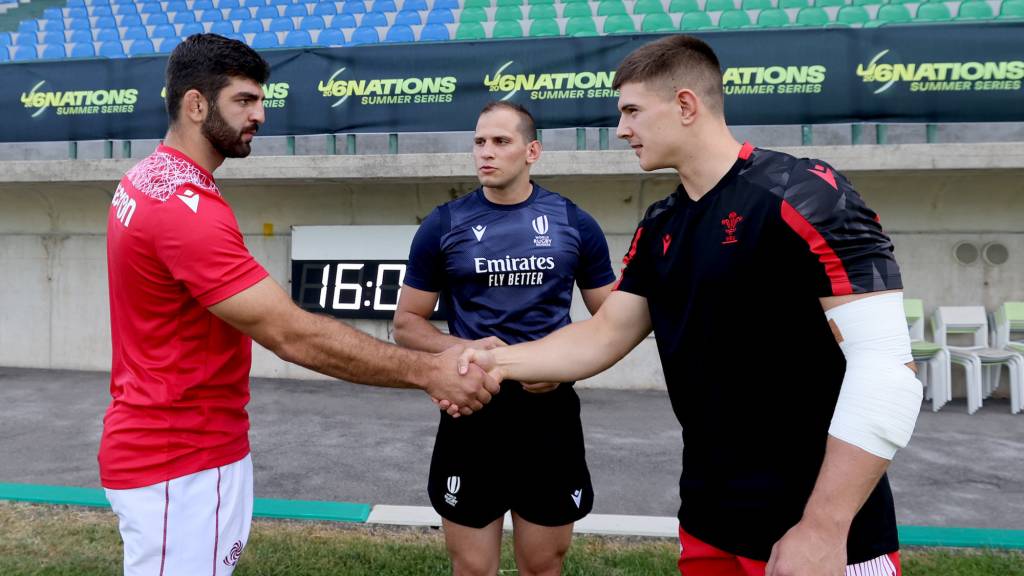 “They were a very good side and a lot better than I thought they were going to be, particularly up front, with an unbelievable driving maul which obviously we struggled to contain at times.”

Despite taking the lead after eight minutes through fly-half Dan Edwards, Wales were not able to sustain the pressure as they had done against Scotland in Round 1.

And Hayward believes that Georgia capitalised brilliantly on a generally sluggish first-half performance.

“They fed off our errors,” he said.

“We knocked the ball on. They have a scrum, they’ve got a scrum, they get a penalty, they kick to the corner and they drive and score. It was very, very effective and efficient.”

Hawkins’ score shifted the momentum in Wales’ favour and Harri Houston’s second effort of the game on the hour mark completed the turnaround.

From there Wales limited their opponents to just a single late penalty, before Jenkins’ steal and back-row forward Benji Williams’ kick to touch confirmed victory in overtime.

“Before we would have crumbled” – Houston delighted by Wales’ progress

Asked what the half time message was, Hayward said: “Well in terms of statistics at half time it was very favourable for us.

“We talk massively about discipline and we only gave away four penalties in the first half. We had 70% territory and 57% possession.

“So when I asked the boys why we were on the wrong side of the scoreboard they said we were just getting absolutely battered physically, we were losing collisions with and without the ball.

“They were hungry, they were hitting us hard, turning us over and they were very clinical when they had the opportunities on driving mauls.”

Hayward’s side should expect an equally physical contest against Pool B leaders Italy on Wednesday. The Azzurrini bettered Georgia’s effort later on Thursday evening with five scores from lineout drives in their 34-14 win over Scotland.

Share this article:
Previous Story Under-20 Six Nations Summer Series Team of the Week: Round 2
Next Story Friendships at the heart of rugby for Italy star Mey