Ireland head coach Richie Murphy bemoaned his team’s carelessness in possession after their 33-24 defeat to South Africa in the Under-20 Six Nations Summer Series.

The game was all-but over by half-time, with South Africa holding a 26-3 lead which reflected their dominance, particularly among the forwards.

Ireland did fight back after the interval and crossed on three occasions but it was not enough and they have now lost back-to-back fixtures having their last five before this competition.

“We were probably a little bit disappointed after the game,” he said. 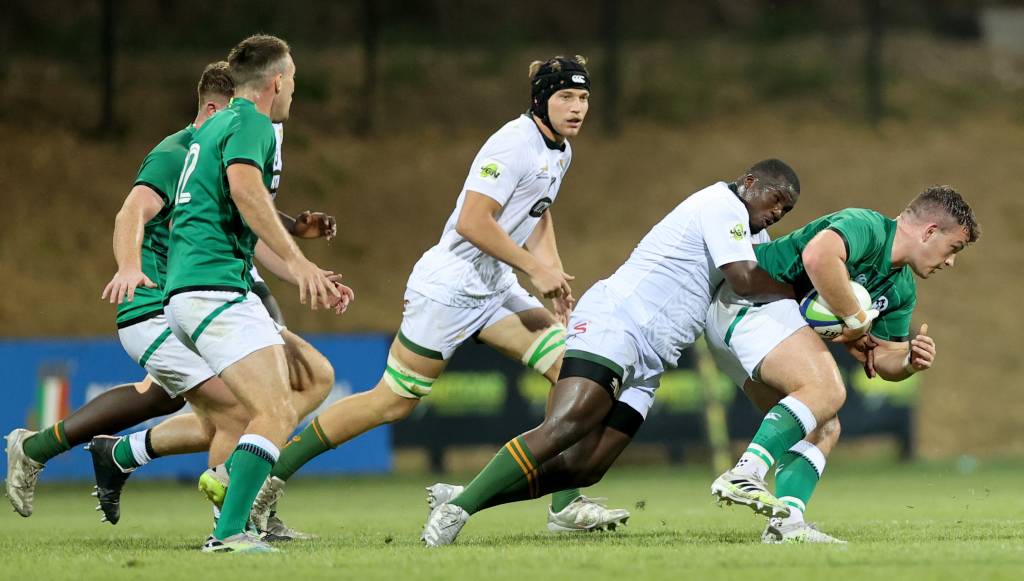 “We didn’t look after the ball well enough. We were a bit loose in our carry and our clean out.

“It’s a big learning curve for us, we’ve got a new group together, quite a few young lads have come in since the Six Nations.

“We’ll dust ourselves down and the great thing about a competition like this is that you have six days to turn it around and we have an opportunity to play against England.

“Hopefully we can tidy the lads up a little bit and fix a few things for that game.”

Murphy emphasised that Ireland’s sloppiness in possession during the first half was a fundamental issue, with Sam Prendergast’s penalty their own contribution to the scoreboard.

“The boys were probably a bit embarrassed about the first half,” he said. “We didn’t feel we looked after the ball well enough, we got stripped on numerous occasions, something that we pride ourselves on and the physical battle.

“Some of the interpretation around breakdowns made it very difficult for us and we definitely didn’t do ourselves justice in that area.

“The referee decided that we were a little big illegal in the scrum which put us under a little bit of pressure and gave them a lot of field position, which as a big mauling team, made it very difficult for us to get a foothold into the game.”

One of the more pleasing aspects of the performance was the second-half fightback which saw Dylan O’Grady, substitute Oisin Michel and captain Reuben Crothers score.

Murphy was pleased with what he saw after the interval and pointed out that his current team is much changed – and much more inexperienced – than the Six Nations Grand Slam winning side.

“I think the guys have shown great character all through this,” he added.

“Firstly with France, we got them on a really good day and, then today, South Africa today were very big, very powerful.”

Attention now turns to a crunch clash with Alan Dickens’ England next Tuesday, who earlier beat France 29-20 in a quite thrilling contest at the Payanini Centre in Verona.

“It’s going to be difficult,” he said. “It’s another massive, big physical challenge. England have size about them.

“We just have to look after ourselves, tidy our own game up and go back to the basics of ball carrying and looking after the ball, the clean out and imposing our game on England.”

Share this article:
Previous Story “Before we would have crumbled” – Houston delighted by Wales’ progress
Next Story “We had the chance and we wasted it” – Kilasonia gutted after Wales defeat