February 11th 2022. For most, just another dreary late winter Friday.

Not so for Nicolo Teneggi. He smiles as he remembers his brightest day in rugby to date, Italy’s first ever Under-20s Six Nations victory over England, with the fly-half kicking the only six points of the match.

He says that the landmark win was just reward for a lot of hard work and believes those involved in the Under-20s Six Nations Summer Series will make a big impact as full internationals in years to come.

“The England game. That was the one,” says Teneggi, when asked about his favourite moment from Italy’s best Under-20s Six Nations campaign.

“Our defence that day was just amazing. Keeping England to zero points was just incredible, they were the winners last year and nobody really bet us on that day so it was the most amazing thing to happen really.

“We’re just hard workers, nobody ever expects Italy to give this sort of great performance, so we know we have nothing to lose. 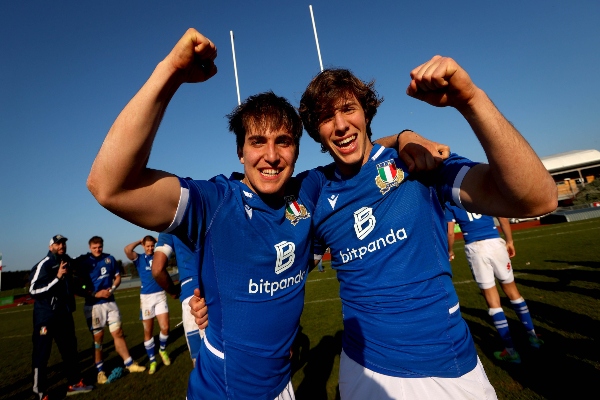 “We’re ambitious, we want to always improve and I think it’s showing now.”

Determined to prove that the England result was no fluke, Teneggi and co put Scotland to the sword, and then Wales, the day after Kieran Crowley’s senior team secured an historic win at Principality Stadium.

To say there is a feel-good factor within Italian rugby at the moment would be an understatement. But Teneggi’s tone sharpens when asked about Italy’s perpetual tag as underdogs.

“We want to show everybody that the future will always be brighter than the present,” he said.

“It stimulates us, it fuels us, we want to show everybody that they are wrong, that rugby in Italy is a very important sport and that we deserve our spot.”

If the performances of their Under-20s are anything to go by, then the future certainly is bright for the senior side.

With Teneggi turning 20 in November, he will be unable to participate for the Azzurrini again next season but reflects on some wonderful memories with a group of players he will dearly miss.

“The Six Nations were wonderful,” he said.

“As soon as we finished, I went back home and I said ‘damn, I wish I could play at this level for six, seven more years to come.’

“With this group, our coaches, it was an incredible time and whenever you are playing for your nation it’s such a special feeling, it is something you’re grateful for and you want to do your best.”

Teneggi appreciates however, that the picture has not always been so rosy for the senior side.

But he believes the last-gasp 22-21 victory over Wales in March will be looked back on as something of a watershed moment, not only for Crowley’s team, but for those coming through the age groups in Italy, who can aspire to be a part of a successful national team.

“It was a very special moment to win again after such a long time,” he explained.

“It was so important for us as a movement and it showed everybody, but most importantly ourselves, that we can still be competitive on an international level.

“Hopefully it will be something that fuels us and the entire movement for years to come. We can still improve.”

Teneggi namechecks Benetton duo Leonardo Marin and Tommaso Menoncello as just two very recent examples of Under-20s stars who have shown that the gap to the senior team can be bridged.

Ferrari playing his part with Italy despite absence on the pitch

And Teneggi believes that the winning mentality which has fostered at youth level will slowly drip through into the senior side.

“The young players coming out of the Under-20s have this will to work hard and to win,” he said.

“The quality will always be better.”

Focusing on the short-term, Teneggi hopes to build on an impressive first Summer Series performance, after a delightful assist for Dewi Passarella and nine points from the tee in Italy’s 36-19 win over Georgia.

And he feels there is no better place to bid farewell to Under-20s than at the Stadio di Monigo, the very same venue for that iconic 6-0 win over England.

“To be able to play in front of your home fans is incredible,” he said.

“It’s such a special group, we’re really strong and united like a family. And when you put on the jersey, it means everything.”